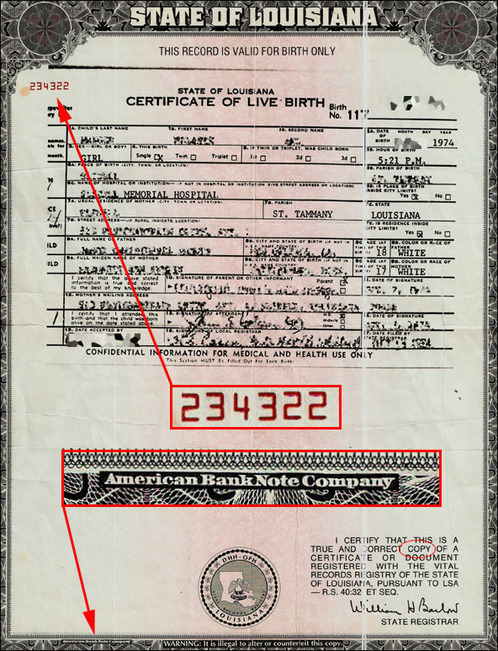 Did the State Pledge Your Body to a Bank?
Right: Some birth and marriage certificates are now "warehouse receipts," printed on banknote paper, which may mark you and yours as 'chattel' property of the banks that our government borrows from every day.
A certificate is a "paper establishing an ownership claim." - Barron's Dictionary of Banking Terms. Registration of births began in 1915, by the Bureau of Census, with all states adopting the practice by 1933.

Birth and marriage certificates are a form of securities called "warehouse receipts." The items included on a warehouse receipt, as descried at §7-202 of the Uniform Commercial Code, the law which governs commercial paper and transactions, which parallel a birth or marriage certificate are:
-the location of the warehouse where the goods are stored...(residence)
-the date of issue of the receipt.....("Date issued")
-the consecutive number of the receipt...(found on back or front of the certificate, usually in red numbers)
-a description of the goods or of the packages containing them...(name, sex, date of birth, etc.)
-the signature of the warehouseman, which may be made by his authorized agent...(municipal clerk or state registrar's signature)
Birth/marriage certificates now appear to at least qualify as "warehouse receipts" under the Uniform Commercial Code. Black's Law Dictionary, Seventh Edition, defines:
warehouse receipt. "...A warehouse receipt, which is considered a document of title, may be a negotiable instrument and is often used for financing with inventory as security."
Since the U.S. went bankrupt in 1933, all new money has to be borrowed into existence. All states started issuing serial-numbered, certificated "warehouse receipts" for births and marriages in order to pledge us as collateral against those loans and municipal bonds taken out with the Federal Reserve's banks. The "Full faith and Credit" of the American people is said to be that which back the nation's debt. That simply means the American people's ability to labor and pay back that  debt. In order to catalog its laborers, the Structure of the Birth Certificate  1 government needed an efficient, methodical system of tracking its property to that end. Humans today are looked upon merely as resources - "human resources" that is.
Governmental assignment of a dollar value to the heads of citizens began on July 14, 1862 when President Lincoln offered 6 percent interest bearing-bonds to states who freed their slaves on a "per head" basis. This practice of valuating humans (cattle?) continues today with our current system of debt-based currency reliant upon a steady stream of fresh new chattels to back it.
Additional Birth Certificate Research
Federal Children by Joyce Rosenwald

In 1921, the federal Sheppard-Towner Maternity Act created the birth "registration" or what we now know as the "birth certificate." It was known as the "Maternity Act" and was sold to the American people as a law that would reduce maternal and infant mortality, protect the health of mothers and  infants, and for "other purposes." One of those other purposes provided for the establishment of a federal bureau designed to cooperate with state agencies in the overseeing of its operations and expenditures. What it really did was create a federal birth registry which exists today, creating "federal
children." This government, under the doctrine  of "Parens Patriae" now legislates for American children as if they are owned by the federal government. Through the public school enrollment process and continuing license requirements for most aspects of daily life, these children grow up to be adults indoctrinated into the process of asking for "permission" from ‘big Daddy’ government to do all those things necessary to carry out daily activities that exist in what is called a "free country."
Before 1921 the records of births and names of children were entered into family bibles, as were the records of marriages and deaths. These records were readily accepted by both the family and the law as "official" records. Since 1921 the American people have been registering the births and names of their children with the government of the state in
which they are born, even though there is no federal law requiring it. The state tells you that registering your child's birth through the birth certificate serves as proof that he/she was born in the united States, thereby making him/her a United States Citizen. For the past several years a social security number has been mandated by the federal government to be issued at birth.

In 1933, bankruptcy was declared by President Roosevelt. The governors of the then 48 States pledged the "full faith and credit" of their states, including the citizenry, as collateral for loans of credit from the Federal Reserve System. To wit: "Full faith and credit" clause of Const. U.S. article 4. sec. 1 requires that foreign judgment be given such faith and credit as it had by law or usage of state of its origin. That foreign statutes are to have force and effect to which they are entitled in home state. And that a judgment or record shall have the same faith, credit, conclusive effect, and obligatory force in other
states as it has by law or usage in the state from whence taken. Black's Law Dictionary, Fourth Edition cites omitted.
Structure of the Birth Certificate  2 The state claims an interest in every child within its jurisdiction. The state (via CPS) will, if it deems it necessary, nullify your parental rights and appoint a guardian (trustee) over your children. The subject of every birth certificate is a child. The  child is a valuable asset, which if properly trained, can contribute valuable assets provided by its labor for many years. It is presumed by those who have researched this issue, that the child itself is the asset of the trust established by the birth certificate, and the social security number is the numbering or registration of the trust, allowing for the assets of the trust to be tracked. If this information is true, your child is now owned by the state. Each one of us, including our children, are considered assets of the bankrupt  UNITED STATES. We are now designated by this government as "HUMAN RESOURCES" with a new crop born every year.

NOTICE: Information served herein is for educational
purposes only, no liability assumed for use. The
information you obtain in this presentation is not, nor is it
intended to be, legal advice. Author does not consent to
unlawful action. Author advocates and encourages one
and all to adhere to, support and defend all law which is
particularly applicable. If anything in this presentation is
found to be in error a good faith effort will be made to
correct it in timely fashion upon notification.
VOID where prohibited by law.